The title of this post will probably remind my most attentive readers of one older post, titled “Go Dubs!“. It is the post that I wrote in February when I went to watch the Golden State Warriors, the NBA team of the Bay. Indeed we are not so far from that: after the NBA, I necessarily had to attend an American football match! I am neither an expert nor passionate about this sport, but I did want to take part in one of the real American rituals.

As shown by the ticket, this time I did not choose the professional franchises, though – thus the San Francisco 49ers or the Oakland raiders – but I “limited” to the UC Berkeley team, i.e. the Golden Bears (which by the way is the name of all the sport teams of this university). As you can see, everyone is “golden” here: after all, California is the Golden State, in memory of the Gold Rush which took place in the area around San Francisco in 1848-1855, with the real boon occurred in 1849 (by the way, try to guess why the 49ers are called 49ers 🙂 ). Concerning the bear, well, the California grizzly bear (which extinguished in 1922) is the symbol of California. Bottom line, I guess it did not take too much time when they had to decide the team name 🙂

In the lines above, I wrote that I “limited” to football college, but this is a bit ungenerous. In fact, if it is true that, for instance, in Italy the youth teams of the Serie A league franchises are not followed by many people, in the US the collegiate championships have a great audience, with big stadiums (as you learnt with the Commencement post) and live broadcasts on the national television.

As the American sport experts well know, football is basically played in the fall only, essentially from September to December (apart from the Super Bowl of the professional teams, which normally takes place around end January / early February). The regular season of the Golden Bears is characterized by twelve matches, half of which at home. Indeed, two of these six had already been played. It was clear that I would not have too many occasions, then. Therefore last week I decided to attend the match of the following Saturday 23, also considering that the match was scheduled at 12.30, in a sunny day but with a mild temperature, so basically with perfect weather conditions.

The Trojans from the University of Southern California (Los Angeles) were the opponent team. Thus, the match was a sort of derby, even if the real Berkeley’s rivalry is more with Stanford, as I wrote in one older post.

However, let’s stop writing and let’s post some pictures! The Memorial Stadium is located just above the Campus, not exactly in a fully accessible area, then. Spectators must park quite far from the stadium and then walk a lot, or take public means of transport. Bottom line, around the stadium the situation is quite messy, as you can see in these pictures.

In particular, this one shows fans walking up to the stadium along Brancroft Way, with also a view over the Golden Gate Bridge. 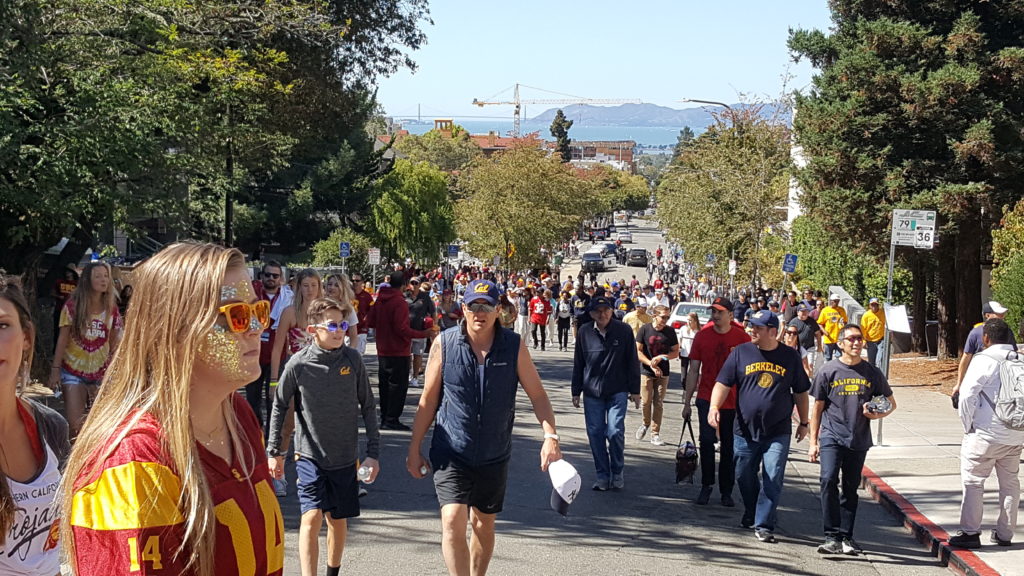 In this picture you can see the International House (my summer accommodation) in the middle, the canopy of the stadium’s main stand on the left, and one of the many fraternities – naturally called with random Greek letters – on the right. 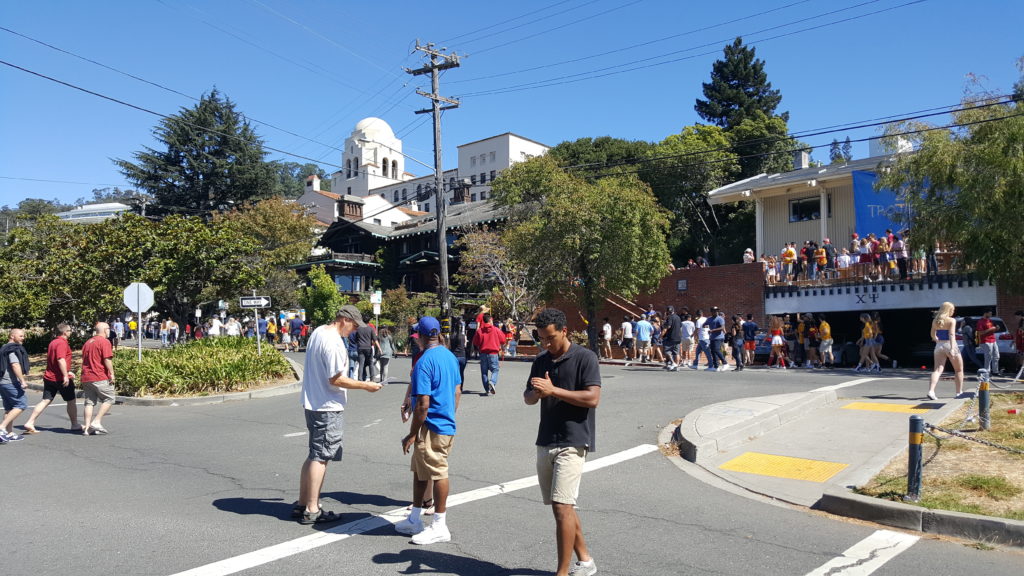 The stadium is not sold out, but there are a lot of people (the attendance is precisely 46474, Wikipedia suggests). As you can see, Trojans supporters from LA are also numerous, naturally accompanied by their cheerleaders and dance crew! 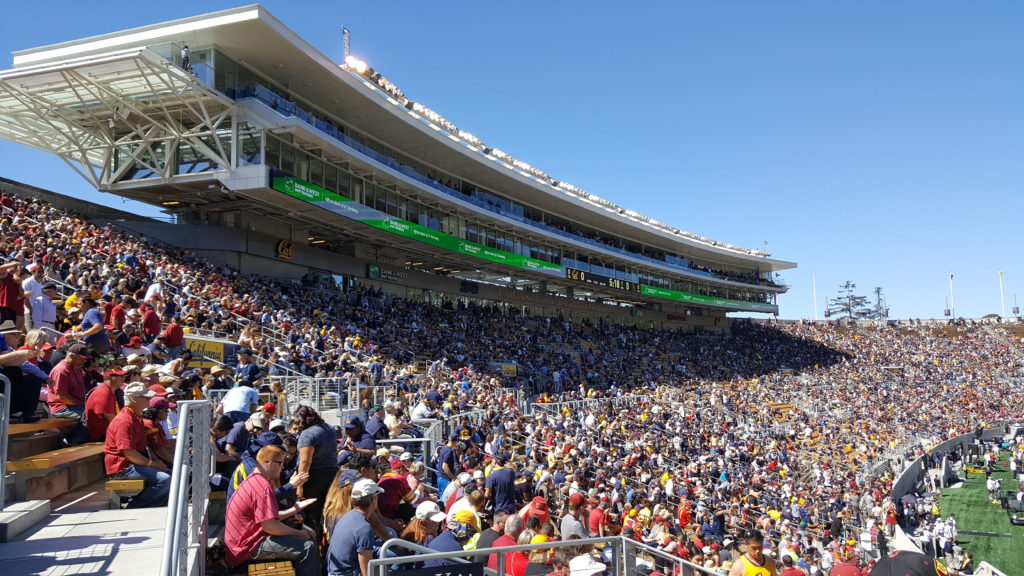 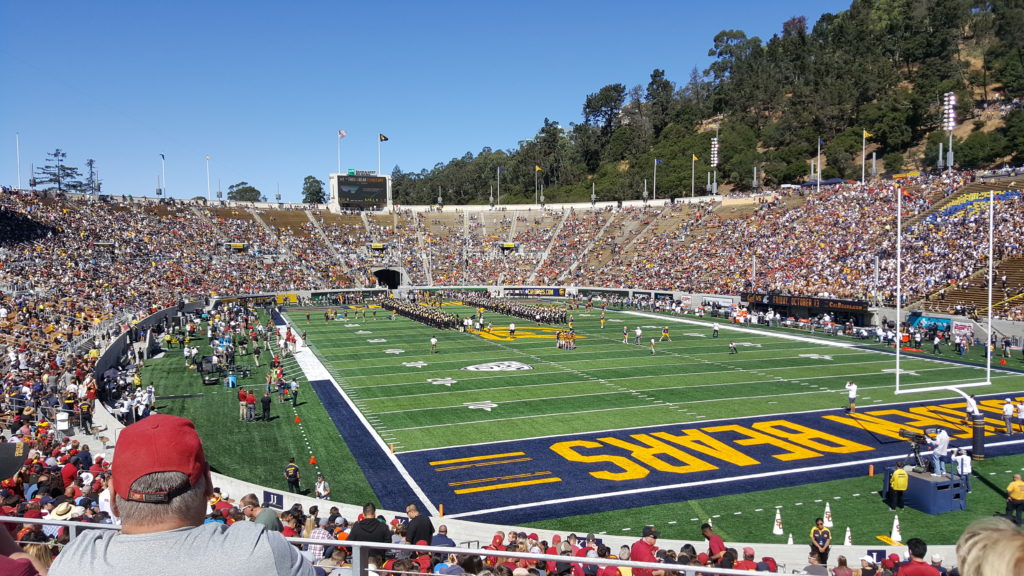 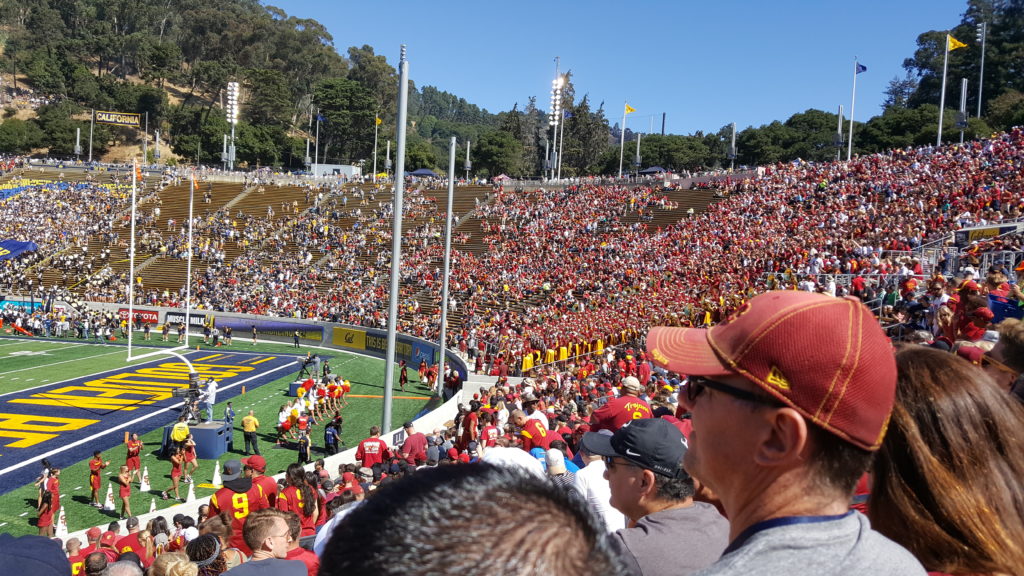 The match begins with a plain entrance of the young players of the Bay, obviously:

Here are a couple of additional pictures of the match: 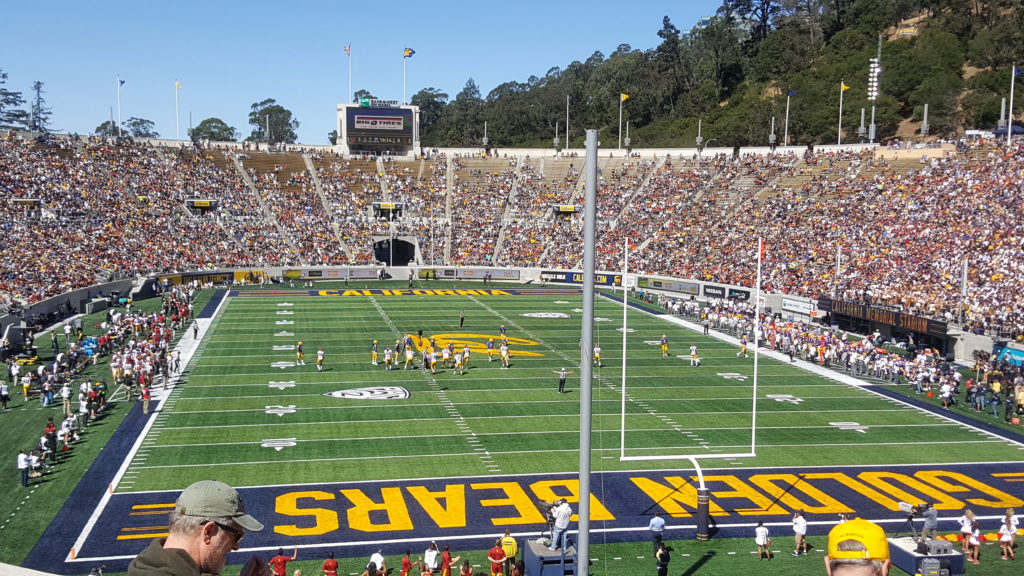 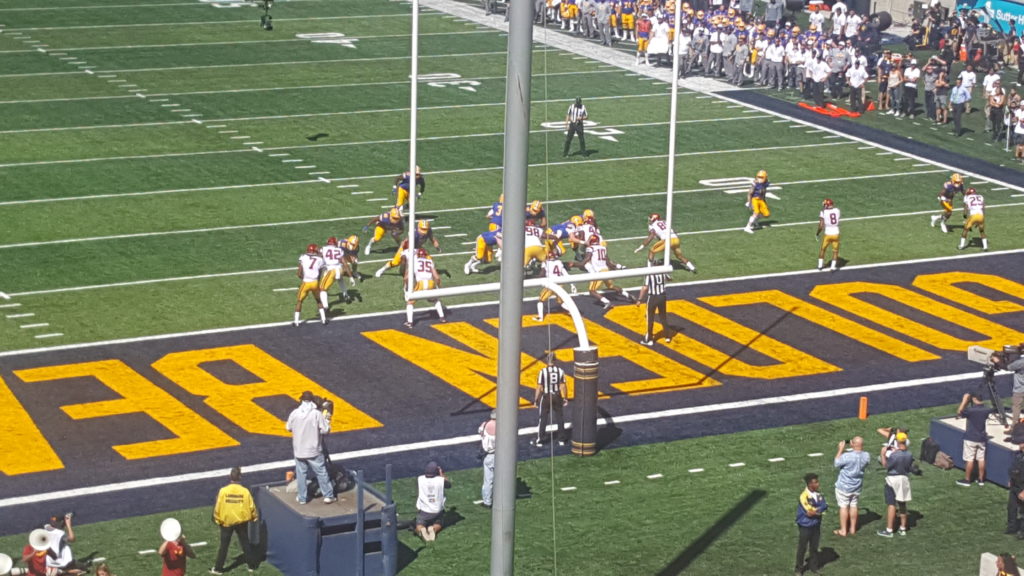 Indeed, there are also some people enjoying the match from the hill for free! 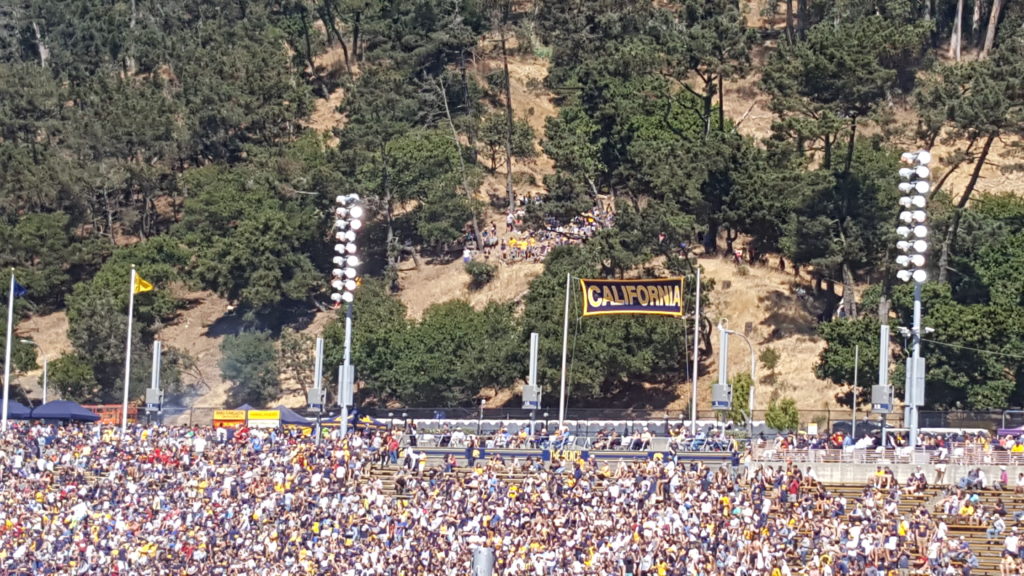 Honestly, although the ticket was not too cheap (unfortunately the $0.00 written on the ticket is fake 🙂 ), I had already thought that I would be highly unlikely to follow the entire match. In fact I was well aware that football matches may be really long and that at some point I would probably get bored. And this is was happened, also because actually the young guys did not play very well (at least to my inexperienced eyes).

Bottom line, after about one hour and a half, I give up and I decide to leave, in order to have a normal lunch instead of having the junk food sold at the stadium… and we were just halfway of the second quarter!

At this webpage you can find the match report: as you can see, the match ended at 4.20 pm! Considering that it had actually begun at 12.40 pm, this means that it lasted three hours and forty minutes! Very few regrets, then: I would never resist until that hour.

In any case, I enjoyed the experience: as said, I am in the States, so a football match could not really be missing the list of my experiences here!

PS. As you saw, the Golden Bears were eventually defeated by 30-20, but I guess I am not losing any sleep for that 🙂