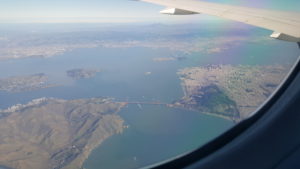 A spring-like weather welcomes me to San Francisco. But I have no illusions: the Bay is known for its weather variability… and in fact the next day I wake up sorrounded by the mist!

Sunday is my first entirely American day and I take this opportunity to have a walk around the neighborhood where I found my provisional accommodation. By the way, both the house and the area are very nice. I cannot resist temptation to give a look at the Campus in order to begin breathing its atmosphere, despite the public holiday. I am immediately attracted by the legendary bell tower, against which I had launched my arrows in the little cartoon which summarized what this adventure means to me, and what this blog is about. Its official name is Sather Tower, but it is normally referred to as The Campanile, i.e. using the Italian term, due to its resemblance to the Campanile of St. Mark’s Square in Venice.

Once down there, you are just $ 3 away from the summit, and so… The view is great, or rather, it appears great, as the hazy sky and the sun’s position in the West don’t allow an optimal view of the Bay. I will surely go back one morning (or maybe at dusk). I guess I will have more than one chance to do that, right? 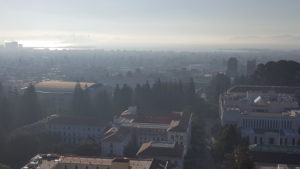