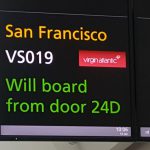 Ready to go! And I say “Finally!”, because it’s been almost one year since I received the notification of the victory (it was January 22, 2016).

A year during which I often fantasized about this experience, trying to imagine it in my head and thinking about it at first as a project still vague and distant, then gradually more and more concrete, and eventually real, with all the procedures needed for my visa, contracts, documents.

But now it’s no longer time to think, it’s time to take the plane! Who knows how it will be? Will I measure up the project? Is Berkeley really the magical place that everyone depicts to me? Well, I will find out soon!